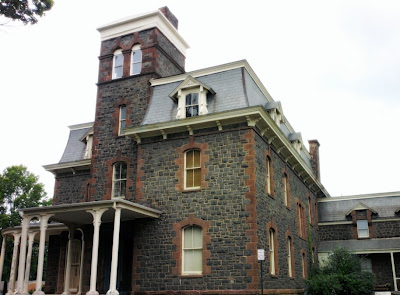 I was invited to investigate Paxton Manor in Leesburg, Virginia on the spookiest night of the summer, July 13th. So, I called up my ghost hunting partner, LaMishia, and recruited 13 intrepid newbies to accompany us as a fundraiser for the ARC of Loudoun County. Paxton Manor has been rumored to be one of the top five haunted places on the east coast and is currently being renovated as a haunted house attraction - Shocktober - for this October. False walls, gory bits flinging themselves at our heads, and the promise of snakes in the basement kept us on our toes the entire night.

Half of our group were kids aged 11-18 and they were fabulous. They took investigating seriously but still recognized it for the adventure it is and enjoyed learning the ropes of ghost hunting. I have no doubt some of them will continue to explore the creepy side of life with a little ghost hunting of their own someday.

Paranormal activity in the house was high with most of the group experiencing various degrees of physical touching: hair being stroked, tickles in the ears (me), being poked in the back (me), goosebumps, and one pinch. One participant saw what she described as a large male entity sitting in a chair at the end of a hallway, who blocked the light shining in from the window behind him; he moved away and up the staircase after she outed him.The house was very humid that night from the hot day but the hallway where we stood cooled noticeably for a manner of five minutes before it returned to its sweltering former temperature. We all wanted him to come back if nothing else than for a bit of relief.  ;)

EVPs from the night are still filtering in. My favorite is from earlier that night with two other investigators, Molly and Gretchen. What do you think, is it a stray breath or a raspberry from the beyond?  ;)

Did a ghost just blow me a raspberry? by Stacey Graham 1